George Clooney recently made news when he was diagnosed with pancreatitis while prepping for his role on ‘The Midnight Sky.’ But what exactly is the illness that allegedly led to the hospitalization of this leading actor?

Pancreatitis refers to the swelling and inflammation of the pancreas. Most frequently, this is caused by gallstones, alcohol use, genetic disorders and certain medications. There are a host of other causes, as well, including injury and infection.

The pancreas is flat, long gland located deep in the abdomen, surrounded by other organs including the spleen, liver and small intestine.

“The pancreas is a very important part of the digestive tract,” said Dr. Ronald Andari, a gastroenterologist at Florida Digestive Health Specialists, “It produces enzymes that aid in the digestion process and helps regulate how our bodies process glucose.”

Pancreatitis can occur as “acute pancreatitis”, which means it appears seemingly suddenly and lasts for days, or it can be chronic, which is when the illness occurs over several years. 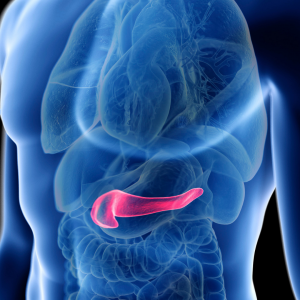 According to Dr. Andari, mild acute pancreatitis generally goes away with rest and treatment.

Hospitalization may be required to monitor and treat the patient. Depending on the severity of the case, your gastroenterologist may recommend surgery to relieve pressure or blockage, or to remove a damaged or infected part of the pancreas.